Interview with Tara Wood - author of "Redemption in Blood" 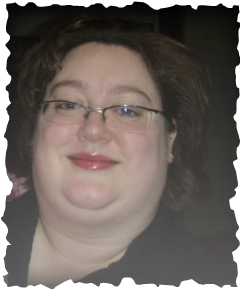 TS: When did you first realize you wanted to be a writer?

TW: I think I’ve always known. But it was never something I thought I could actually be. It wasn’t until a few years ago when I reconnected with an old friend that it came to me. The little push that said, “You need to do this. You can do this.” And I made a bet with her to write a book in a year. Ten months later, I had the first draft of Redemption In Blood in my hands.

TS: How long does it take you to write a book?

TW: With Redemption In Blood, it took me ten months to write out the first draft. I set it aside for a few months and then came back for editing and rewrites. Overall, I would say it took me about fifteen to produce the work as published. I’m hoping to decrease that time frame with the next couple of books. We’ll see how it goes. I’m a terrible procrastinator.

TS: What would you say is your interesting writing quirk?

TW: I don’t know if you would call it a quirk, but before I even put pen to paper, I can see the scene in my head. It plays like a movie reel, complete with a soundtrack. The trick is getting what I see in my head to play out on the page. I have trouble with that sometimes. And I don’t write in order. I may start at the beginning and then skip to the end, or the middle. Somehow it all manages to blend together.

TS: How do books get published? And what do you think is the best way?

TW: I don’t think in the current publishing climate there is a best way. Sure, if you’re lucky enough to make it out of the slush pile and get representation and make it to the Big Six, you’re doing well. That’s not to say that there aren’t a great number of indie writers who are self-publishing and marketing themselves in order to get a fan base and get their books out there. Because there are. I’m one of them. I think that’s what most writers want; to get their books in the hands of readers. And bless them for however they manage that.

TS: Where do you get your information or ideas for your books?

TW: Anywhere and everywhere! Overheard conversations, music, movies, etc. As far as information, I try to do as much research as I can on factual things. While you can’t trust everything on the internet, it makes things so much easier. Just double check your sources.

TS: When did you write your first book and how old were you?

TS: What do you like to do when you're not writing?

TW: I love to read, of course. I cook a lot and I sew a little. I am in love with British television and films. Absolutely in love with the BBC version of Sherlock and iTV’s Lewis. Two of my favorite programs. I love to spend time with my friends and family, and my husband and I love to travel.

TS: What was one of the most surprising things you learned in creating your book/s?

TW: That it wasn’t writing the book that was the hard part. It was everything that has come after. After deciding to go the self-publishing route, I woefully underestimated what I would need to do to market myself and get people interested in reading my work. Luckily, I have come across some really wonderful people (writers *cough*) who have been so helpful with that. I’ve made some new friends as well.

TS: How many books have you written? Which is your favorite?

TW: I have written one, Redemption In Blood, by myself and I have co-authored another with a friend. That book is still being edited, but the first draft is completed.

TS: you wrote the book “Redemption in Blood: A Novel of the Penitent”, are you planning to write more books in the vampire genre?

TW: I am. Redemption In Blood is the first in my In Blood series. I am projecting to complete six more books within this series. I am very busy. And a little overwhelmed. There are lots of characters to be dealt with. They all want their own book. They’re very pushy.

TS: Can you tell me and your readers something about your main characters

TW: Ah, Vesper. She is the heroine of this story and she means a great deal to me. She is tough and focused, but underneath she’s vulnerable and very real. It was tough to put her through some of the situations I did, but I knew deep down she could handle it. She’s an amazing woman. And Decker. I may swoon. He doesn’t think of himself as a hero, but it’s so clear that he is. He’s carrying a lot of hurt and pain and I just ached for him. The sort of brokenness about them made them click early on, but you knew their connection was fragile. Part of what was so wonderful about writing them was finally getting to see them strengthen each other. Really, I could go on forever.

TS: Do you hear from your readers much? What kinds of things do they say?

TW: I wish I did! I would love to hear from everyone who has read it! But, the feedback so far has been really positive.

TS: What do you think makes a good story?

TW: The characters. You have to really be invested in their lives and what happens to them. I don’t care if they’re popping out to Starbucks for a latte. If I am totally in love with that character and what they do, it makes me want to queue up behind them for a Frappuccino.

TS: What are your favorite book genres?

TW: I love all kinds of thrillers. Paranormal romance and urban fantasy. I also read a lot of historical romance and epic fantasy.

TS: As a child, what did you want to do when you grew up?

TW: There was a great portion of my life where I wanted to be a veterinarian. I believe becoming a writer was probably for the best. I was terrible at math and science.

TS: Tara, thank you so much for this interview! I really appreciate the time you took for this! And I really enjoyed reading your answers, and hoping also the readers of this blog will enjoy them as well! I wish you good luck with your future projects and of course with Redemption in Blood!
Tweet