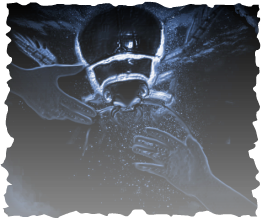 Joe, who had taken his place again, eyed Tom, trying to hide his own concern.
“Of course it was the wind, you chicken. “ He had no idea what had just happened and a cold shower ran down his spine yet he did not want Tom to notice. He steadied himself holding the side of the boat with one hand and looked towards Tom whose whole body was trembling and stammered.

“Have you been able to see anything in the water?“ Joe nodded his head, trying to play down the whole situation.
“No, there’s nothing there. The boat has probably just crossed an little uneven ground and that is what caused the shaking."

Although coming from his own lips, he himself could not really believe what he had just said. He nodded at Tom affirmatively and got up again. He opened the box in the middle of the boat, grasping a small torch. At a click of his thumb the torch radiated a yellowish light. He pointed the lamp at the water and scrutinized the surface once again. But again he could detect nothing. He lowered the hand with the torch and turned to Tom who was still sitting trembling.

„Look, there is no mons...“ But precisely at that moment came the sound of a muffled tone. A scream muted by the water. Joe was startled. Totally shocked he dropped the torch into the water holding his ears closed with both hands. Tom also grabbed the towel beside him, folding it instantly over his head. Joe’s eyes widened, now he also had problems continuing to suppress his fear. He swirled around looking from every direction into the water yet he could see nothing. It was almost as if a ghost was attacking the boat. With a jolt something crashed against the back of the boat and it began rocking again. This time Joe had no chance. He slipped, falling backwards and lost his balance. He fell overboard into the water. Tom jumped up, looking into the water. He was under total shock and hadn’t a clue what to do. He combed the surface of the water but could find Joe nowhere.

Suddenly bubbles of air rose to the surface and Joe hastily gasped for air. He shouted to Tom.
“Come on you idiot, stop gazing so dumbly into the water. Get me out of here.” Tom was still in a complete state of shock, he gathered his courage. He bent over the edge of the boat stretching his hand out to Joe who tried with all his strength to pull himself up but in vein. He lost hold of his hand and fell back into the cool water, thrashing about with both legs to stay afloat. But something under the water already had him in its sights and moved faster and faster towards him. Joe shouted to Tom.

“Faster, faster, get me out of here!” Tom grabbed his hand once again and pulled as hard as he could, but then he turned his gaze to the water behind Joe. The sight that revealed itself shocked him so much that he abruptly let go of Joe's hand who fell backwards again into the water. Joe didn't understand the world any longer and was visibly angry and screamed at Tom.

“You idiot, what’s the matter with you?” But then he felt something moving behind him. It was moving at an extraordinary speed and heading straight towards him. Joe whirled around and saw an approximately one meter large creature coming towards him. Now it was all or nothing. He had no time to lose and tried to get out of the water on his own. But it was too late. The creature had reached him and pulled him down backwards from the side of the boat. He cried for help and fought tooth and nail to defend himself. But he did not have a chance.

The creature clenched him by the neck, pulling him down into the depths of the ocean. Tom who had had to watch the whole spectacle fell back onto his seat after the event. He bent forwards holding his head in both hands. He bobbed up and down, his whole body trembling. The shock of what had just happened had mortified him. He thought the nightmare was over but once again came the frightening muffled noise. The boat began to rock. Tom grasped the side of the boot when its wooden bottom broke up before his eyes. Before he could manage to get up or get out of the way he was confronted by the gigantic creature. He stared into the eyes of the beetle-like animal. They were grayish in color and shimmered translucently in the light of the stars.

Tom’s eyes widened and he screamed for help. Suddenly a harpoon-like tongue shot from the mouth of the creature and in one stroke bored through Tom’s head. The last cry hushed into the night and the creature dived into the depths with its prey. All that remained was the destroyed remains of a wooden boat. But the attack ensured that the boat slowly but surely began to sink. In a few minutes it would be impossible to discover and an accident could no longer be reconstructed....